Complete Form 1040 - U.s. Individual Income Tax Return - 2013 with your personal data - all interactive fields are highlighted in places where you should type, access drop-down lists or select multiple-choice options. 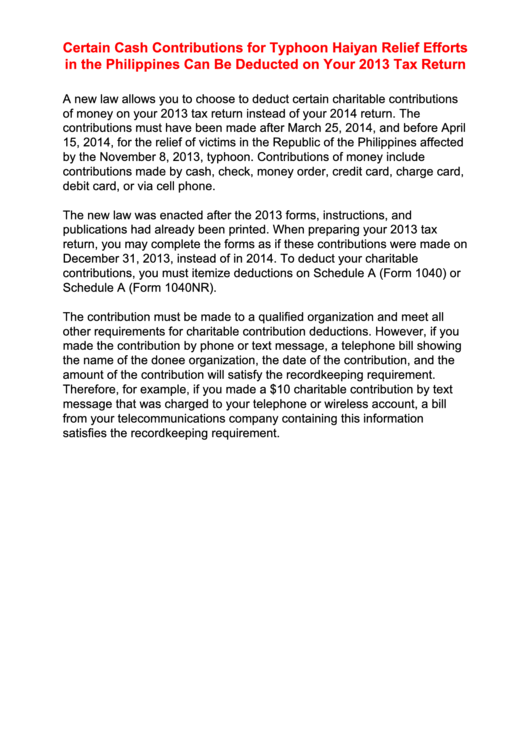 3
Certain Cash Contributions for Typhoon Haiyan Relief Efforts
in the Philippines Can Be Deducted on Your 2013 Tax Return
A new law allows you to choose to deduct certain charitable contributions
of money on your 2013 tax return instead of your 2014 return. The
contributions must have been made after March 25, 2014, and before April
15, 2014, for the relief of victims in the Republic of the Philippines affected
by the November 8, 2013, typhoon. Contributions of money include
contributions made by cash, check, money order, credit card, charge card,
debit card, or via cell phone.
The new law was enacted after the 2013 forms, instructions, and
publications had already been printed. When preparing your 2013 tax
return, you may complete the forms as if these contributions were made on
December 31, 2013, instead of in 2014. To deduct your charitable
contributions, you must itemize deductions on Schedule A (Form 1040) or
Schedule A (Form 1040NR).
The contribution must be made to a qualified organization and meet all
other requirements for charitable contribution deductions. However, if you
made the contribution by phone or text message, a telephone bill showing
the name of the donee organization, the date of the contribution, and the
amount of the contribution will satisfy the recordkeeping requirement.
Therefore, for example, if you made a $10 charitable contribution by text
message that was charged to your telephone or wireless account, a bill
from your telecommunications company containing this information
satisfies the recordkeeping requirement.