Complete Dd Form 2760, 2002, Qualification To Possess Firearms Or Ammunition with your personal data - all interactive fields are highlighted in places where you should type, access drop-down lists or select multiple-choice options. 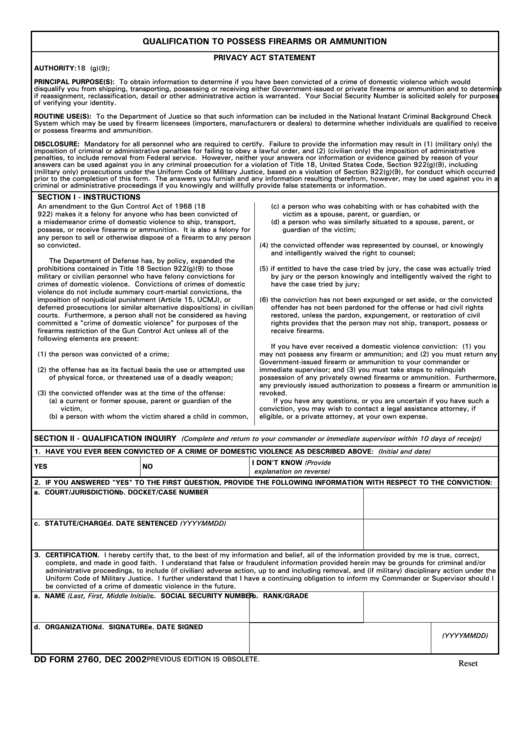 1
QUALIFICATION TO POSSESS FIREARMS OR AMMUNITION
PRIVACY ACT STATEMENT
AUTHORITY: 18 U.S.C. 922(g)(9); E.O. 9397.
PRINCIPAL PURPOSE(S): To obtain information to determine if you have been convicted of a crime of domestic violence which would
disqualify you from shipping, transporting, possessing or receiving either Government-issued or private firearms or ammunition and to determine
if reassignment, reclassification, detail or other administrative action is warranted. Your Social Security Number is solicited solely for purposes
of verifying your identity.
ROUTINE USE(S): To the Department of Justice so that such information can be included in the National Instant Criminal Background Check
System which may be used by firearm licensees (importers, manufacturers or dealers) to determine whether individuals are qualified to receive
or possess firearms and ammunition.
DISCLOSURE: Mandatory for all personnel who are required to certify. Failure to provide the information may result in (1) (military only) the
imposition of criminal or administrative penalties for failing to obey a lawful order, and (2) (civilian only) the imposition of administrative
penalties, to include removal from Federal service. However, neither your answers nor information or evidence gained by reason of your
answers can be used against you in any criminal prosecution for a violation of Title 18, United States Code, Section 922(g)(9), including
(military only) prosecutions under the Uniform Code of Military Justice, based on a violation of Section 922(g)(9), for conduct which occurred
prior to the completion of this form. The answers you furnish and any information resulting therefrom, however, may be used against you in a
criminal or administrative proceedings if you knowingly and willfully provide false statements or information.
SECTION I - INSTRUCTIONS
An amendment to the Gun Control Act of 1968 (18 U.S.C.
(c) a person who was cohabiting with or has cohabited with the
victim as a spouse, parent, or guardian, or
922) makes it a felony for anyone who has been convicted of
a misdemeanor crime of domestic violence to ship, transport,
(d) a person who was similarly situated to a spouse, parent, or
possess, or receive firearms or ammunition. It is also a felony for
guardian of the victim;
any person to sell or otherwise dispose of a firearm to any person
so convicted.
(4) the convicted offender was represented by counsel, or knowingly
and intelligently waived the right to counsel;
The Department of Defense has, by policy, expanded the
prohibitions contained in Title 18 Section 922(g)(9) to those
(5) if entitled to have the case tried by jury, the case was actually tried
military or civilian personnel who have felony convictions for
by jury or the person knowingly and intelligently waived the right to
crimes of domestic violence. Convictions of crimes of domestic
have the case tried by jury;
violence do not include summary court-martial convictions, the
imposition of nonjudicial punishment (Article 15, UCMJ), or
(6) the conviction has not been expunged or set aside, or the convicted
deferred prosecutions (or similar alternative dispositions) in civilian
offender has not been pardoned for the offense or had civil rights
courts. Furthermore, a person shall not be considered as having
restored, unless the pardon, expungement, or restoration of civil
committed a "crime of domestic violence" for purposes of the
rights provides that the person may not ship, transport, possess or
firearms restriction of the Gun Control Act unless all of the
receive firearms.
following elements are present:
If you have ever received a domestic violence conviction: (1) you
(1) the person was convicted of a crime;
may not possess any firearm or ammunition; and (2) you must return any
Government-issued firearm or ammunition to your commander or
(2) the offense has as its factual basis the use or attempted use
immediate supervisor; and (3) you must take steps to relinquish
of physical force, or threatened use of a deadly weapon;
possession of any privately owned firearms or ammunition. Furthermore,
any previously issued authorization to possess a firearm or ammunition is
(3) the convicted offender was at the time of the offense:
revoked.
(a) a current or former spouse, parent or guardian of the
If you have any questions, or you are uncertain if you have such a
victim,
conviction, you may wish to contact a legal assistance attorney, if
(b) a person with whom the victim shared a child in common,
eligible, or a private attorney, at your own expense.
SECTION II - QUALIFICATION INQUIRY
(Complete and return to your commander or immediate supervisor within 10 days of receipt)
1. HAVE YOU EVER BEEN CONVICTED OF A CRIME OF DOMESTIC VIOLENCE AS DESCRIBED ABOVE: (Initial and date)
I DON'T KNOW (Provide
YES
NO
explanation on reverse)
2. IF YOU ANSWERED "YES" TO THE FIRST QUESTION, PROVIDE THE FOLLOWING INFORMATION WITH RESPECT TO THE CONVICTION:
a. COURT/JURISDICTION
b. DOCKET/CASE NUMBER
c. STATUTE/CHARGE
d. DATE SENTENCED (YYYYMMDD)
3. CERTIFICATION. I hereby certify that, to the best of my information and belief, all of the information provided by me is true, correct,
complete, and made in good faith. I understand that false or fraudulent information provided herein may be grounds for criminal and/or
administrative proceedings, to include (if civilian) adverse action, up to and including removal, and (if military) disciplinary action under the
Uniform Code of Military Justice. I further understand that I have a continuing obligation to inform my Commander or Supervisor should I
be convicted of a crime of domestic violence in the future.
a. NAME (Last, First, Middle Initial)
b. RANK/GRADE
c. SOCIAL SECURITY NUMBER
d. ORGANIZATION
d. SIGNATURE
e. DATE SIGNED
(YYYYMMDD)
DD FORM 2760, DEC 2002
PREVIOUS EDITION IS OBSOLETE.
Reset