Complete Death Of Spouse Affidavit Form - State Of California with your personal data - all interactive fields are highlighted in places where you should type, access drop-down lists or select multiple-choice options. 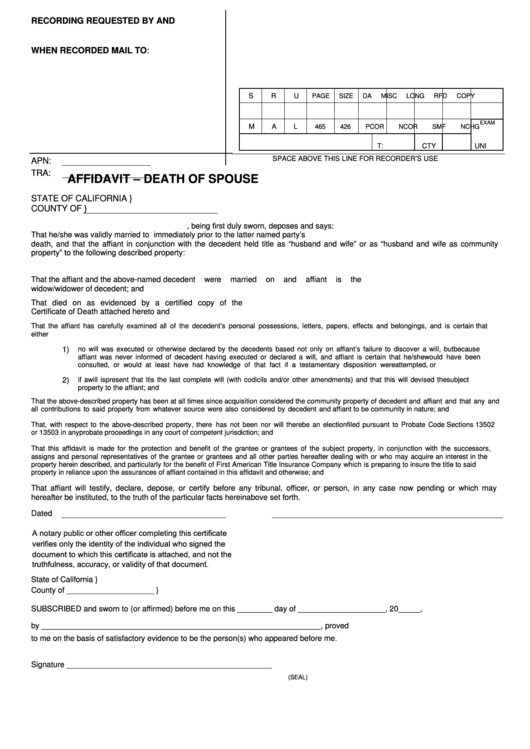 1
RECORDING REQUESTED BY AND
WHEN RECORDED MAIL TO:
S
R
U
PAGE
SIZE
DA
MISC
LONG
RFD
COPY
EXAM
M
A
L
465
426
PCOR
NCOR
SMF
NCHG
T:
CTY
UNI
SPACE ABOVE THIS LINE FOR RECORDER’S USE
APN:
TRA:
AFFIDAVIT – DEATH OF SPOUSE
STATE OF CALIFORNIA
}
COUNTY OF
}
, being first duly sworn, deposes and says:
That he/she was validly married to
immediately prior to the latter named party’s
death, and that the affiant in conjunction with the decedent held title as “husband and wife” or as “husband and wife as community
property” to the following described property:
That the affiant and the above-named decedent were married on
and
affiant
is
the
widow/widower of decedent; and
That
died on
as evidenced by a certified copy of the
Certificate of Death attached hereto and
That the affiant has carefully examined all of the decedent’s personal possessions, letters, papers, effects and belongings, and is certain that
either
1)
no will was executed or otherwise declared by the decedents based not only on affiant’s failure to discover a will, but because
affiant was never informed of decedent having executed or declared a will, and affiant is certain that he/she would have been
consulted, or would at least have had knowledge of that fact if a testamentary disposition were attempted, or
2)
if a will is present that it is the last complete will (with codicils and/or other amendments) and that this will devised the subject
property to the affiant; and
That the above-described property has been at all times since acquisition considered the community property of decedent and affiant and that any and
all contributions to said property from whatever source were also considered by decedent and affiant to be community in nature; and
That, with respect to the above-described property, there has not been nor will there be an election filed pursuant to Probate Code Sections 13502
or 13503 in any probate proceedings in any court of competent jurisdiction; and
That this affidavit is made for the protection and benefit of the grantee or grantees of the subject property, in conjunction with the successors,
assigns and personal representatives of the grantee or grantees and all other parties hereafter dealing with or who may acquire an interest in the
property herein described, and particularly for the benefit of First American Title Insurance Company which is preparing to insure the title to said
property in reliance upon the assurances of affiant contained in this affidavit and otherwise; and
That affiant will testify, declare, depose, or certify before any tribunal, officer, or person, in any case now pending or which may
hereafter be instituted, to the truth of the particular facts hereinabove set forth.
Dated
A notary public or other officer completing this certificate
verifies only the identity of the individual who signed the
document to which this certificate is attached, and not the
truthfulness, accuracy, or validity of that document.
State of California
}
County of ____________________ }
SUBSCRIBED and sworn to (or affirmed) before me on this ________ day of ____________________, 20_____,
by ________________________________________________________________, proved
to me on the basis of satisfactory evidence to be the person(s) who appeared before me.
Signature _______________________________________________
(SEAL)

Affidavit Of Death Of Trustee Form - State Of California Legal

Form Boe-260-a - Certificate And Affidavit For Exemption Of Certain Aircraft Claim For Exemption From Property Taxes Under Section 2 Of Article Xiii Of The Constitution Of The State Of California And Section 217.1 Of The Revenue And Taxation Code Financial