Complete Form 1040-Es - Estimated Tax For Individuals - 2012 with your personal data - all interactive fields are highlighted in places where you should type, access drop-down lists or select multiple-choice options. 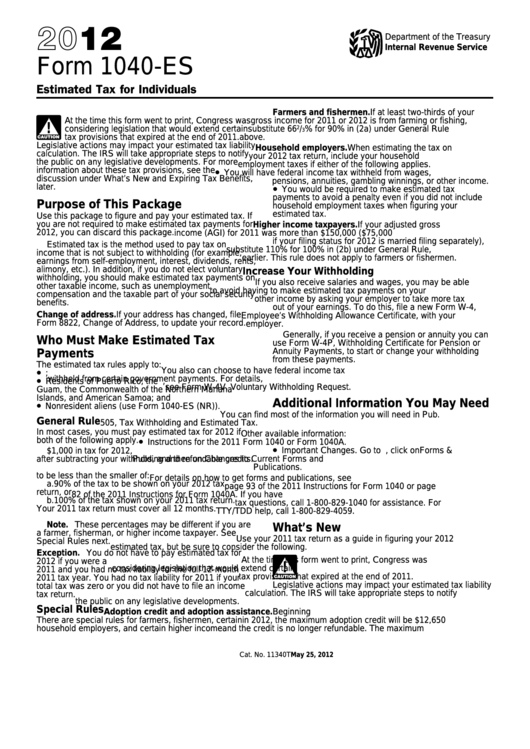 12
2012
Department of the Treasury
Internal Revenue Service
Form 1040-ES
Estimated Tax for Individuals
Farmers and fishermen. If at least two-thirds of your
At the time this form went to print, Congress was
gross income for 2011 or 2012 is from farming or fishing,
!
considering legislation that would extend certain
substitute 66
/
% for 90% in (2a) under General Rule
2
3
tax provisions that expired at the end of 2011.
above.
CAUTION
Legislative actions may impact your estimated tax liability
Household employers. When estimating the tax on
calculation. The IRS will take appropriate steps to notify
your 2012 tax return, include your household
the public on any legislative developments. For more
employment taxes if either of the following applies.
•
information about these tax provisions, see the
You will have federal income tax withheld from wages,
discussion under What’s New and Expiring Tax Benefits,
pensions, annuities, gambling winnings, or other income.
•
later.
You would be required to make estimated tax
payments to avoid a penalty even if you did not include
Purpose of This Package
household employment taxes when figuring your
estimated tax.
Use this package to figure and pay your estimated tax. If
you are not required to make estimated tax payments for
Higher income taxpayers. If your adjusted gross
2012, you can discard this package.
income (AGI) for 2011 was more than $150,000 ($75,000
if your filing status for 2012 is married filing separately),
Estimated tax is the method used to pay tax on
substitute 110% for 100% in (2b) under General Rule,
income that is not subject to withholding (for example,
earlier. This rule does not apply to farmers or fishermen.
earnings from self-employment, interest, dividends, rents,
alimony, etc.). In addition, if you do not elect voluntary
Increase Your Withholding
withholding, you should make estimated tax payments on
If you also receive salaries and wages, you may be able
other taxable income, such as unemployment
to avoid having to make estimated tax payments on your
compensation and the taxable part of your social security
other income by asking your employer to take more tax
benefits.
out of your earnings. To do this, file a new Form W-4,
Change of address. If your address has changed, file
Employee’s Withholding Allowance Certificate, with your
Form 8822, Change of Address, to update your record.
employer.
Generally, if you receive a pension or annuity you can
Who Must Make Estimated Tax
use Form W-4P, Withholding Certificate for Pension or
Annuity Payments, to start or change your withholding
Payments
from these payments.
The estimated tax rules apply to:
•
You also can choose to have federal income tax
U.S. citizens and resident aliens;
•
withheld from certain government payments. For details,
Residents of Puerto Rico, the U.S. Virgin Islands,
see Form W-4V, Voluntary Withholding Request.
Guam, the Commonwealth of the Northern Mariana
Islands, and American Samoa; and
•
Additional Information You May Need
Nonresident aliens (use Form 1040-ES (NR)).
You can find most of the information you will need in Pub.
General Rule
505, Tax Withholding and Estimated Tax.
In most cases, you must pay estimated tax for 2012 if
Other available information:
•
both of the following apply.
Instructions for the 2011 Form 1040 or Form 1040A.
•
1. You expect to owe at least $1,000 in tax for 2012,
Important Changes. Go to IRS.gov, click on Forms &
Pubs, and then on Changes to Current Forms and
after subtracting your withholding and refundable credits.
2. You expect your withholding and refundable credits
Publications.
to be less than the smaller of:
For details on how to get forms and publications, see
a. 90% of the tax to be shown on your 2012 tax
page 93 of the 2011 Instructions for Form 1040 or page
return, or
82 of the 2011 Instructions for Form 1040A. If you have
b. 100% of the tax shown on your 2011 tax return.
tax questions, call 1-800-829-1040 for assistance. For
Your 2011 tax return must cover all 12 months.
TTY/TDD help, call 1-800-829-4059.
Note. These percentages may be different if you are
What’s New
a farmer, fisherman, or higher income taxpayer. See
Use your 2011 tax return as a guide in figuring your 2012
Special Rules next.
estimated tax, but be sure to consider the following.
Exception. You do not have to pay estimated tax for
At the time this form went to print, Congress was
2012 if you were a U.S. citizen or resident alien for all of
!
considering legislation that would extend certain
2011 and you had no tax liability for the full 12-month
tax provisions that expired at the end of 2011.
2011 tax year. You had no tax liability for 2011 if your
CAUTION
Legislative actions may impact your estimated tax liability
total tax was zero or you did not have to file an income
calculation. The IRS will take appropriate steps to notify
tax return.
the public on any legislative developments.
Special Rules
Adoption credit and adoption assistance. Beginning
There are special rules for farmers, fishermen, certain
in 2012, the maximum adoption credit will be $12,650
household employers, and certain higher income
and the credit is no longer refundable. The maximum
taxpayers.
amount of adoption assistance that can be excluded from
May 25, 2012
Cat. No. 11340T