Complete Dd Form 2940 - Statement Of Entitlement To Educational Assistance with your personal data - all interactive fields are highlighted in places where you should type, access drop-down lists or select multiple-choice options. 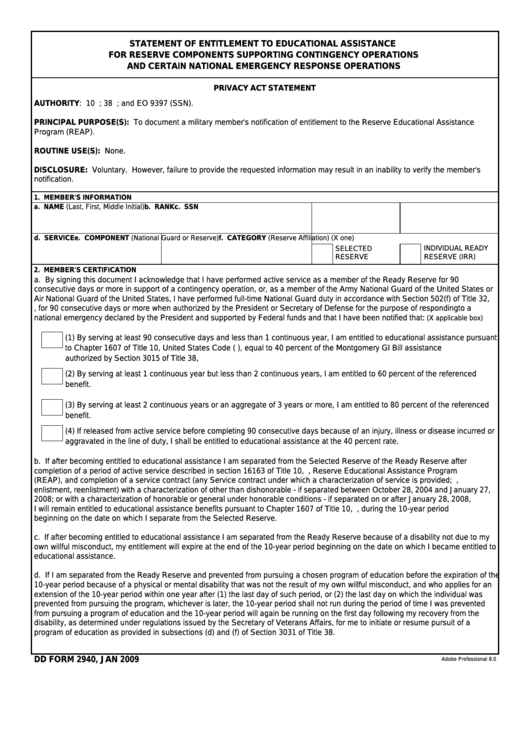 2
STATEMENT OF ENTITLEMENT TO EDUCATIONAL ASSISTANCE
FOR RESERVE COMPONENTS SUPPORTING CONTINGENCY OPERATIONS
AND CERTAIN NATIONAL EMERGENCY RESPONSE OPERATIONS
PRIVACY ACT STATEMENT
AUTHORITY: 10 U.S.C. Chapter 1607; 38 U.S.C. Chapter 30; and EO 9397 (SSN).
PRINCIPAL PURPOSE(S): To document a military member's notification of entitlement to the Reserve Educational Assistance
Program (REAP).
ROUTINE USE(S): None.
DISCLOSURE: Voluntary. However, failure to provide the requested information may result in an inability to verify the member's
notification.
1. MEMBER'S INFORMATION
a. NAME (Last, First, Middle Initial)
b. RANK
c. SSN
d. SERVICE
e. COMPONENT (National Guard or Reserve)
f. CATEGORY (Reserve Affiliation) (X one)
SELECTED
INDIVIDUAL READY
RESERVE
RESERVE (IRR)
2. MEMBER'S CERTIFICATION
a. By signing this document I acknowledge that I have performed active service as a member of the Ready Reserve for 90
consecutive days or more in support of a contingency operation, or, as a member of the Army National Guard of the United States or
Air National Guard of the United States, I have performed full-time National Guard duty in accordance with Section 502(f) of Title 32,
U.S.C., for 90 consecutive days or more when authorized by the President or Secretary of Defense for the purpose of responding to a
national emergency declared by the President and supported by Federal funds and that I have been notified that:
(X applicable box)
(1) By serving at least 90 consecutive days and less than 1 continuous year, I am entitled to educational assistance pursuant
to Chapter 1607 of Title 10, United States Code (U.S.C.), equal to 40 percent of the Montgomery GI Bill assistance
authorized by Section 3015 of Title 38, U.S.C.
(2) By serving at least 1 continuous year but less than 2 continuous years, I am entitled to 60 percent of the referenced
benefit.
(3) By serving at least 2 continuous years or an aggregate of 3 years or more, I am entitled to 80 percent of the referenced
benefit.
(4) If released from active service before completing 90 consecutive days because of an injury, illness or disease incurred or
aggravated in the line of duty, I shall be entitled to educational assistance at the 40 percent rate.
b. If after becoming entitled to educational assistance I am separated from the Selected Reserve of the Ready Reserve after
completion of a period of active service described in section 16163 of Title 10, U.S.C., Reserve Educational Assistance Program
(REAP), and completion of a service contract (any Service contract under which a characterization of service is provided; e.g.,
enlistment, reenlistment) with a characterization of other than dishonorable - if separated between October 28, 2004 and January 27,
2008; or with a characterization of honorable or general under honorable conditions - if separated on or after January 28, 2008,
I will remain entitled to educational assistance benefits pursuant to Chapter 1607 of Title 10, U.S.C., during the 10-year period
beginning on the date on which I separate from the Selected Reserve.
c. If after becoming entitled to educational assistance I am separated from the Ready Reserve because of a disability not due to my
own willful misconduct, my entitlement will expire at the end of the 10-year period beginning on the date on which I became entitled to
educational assistance.
d. If I am separated from the Ready Reserve and prevented from pursuing a chosen program of education before the expiration of the
10-year period because of a physical or mental disability that was not the result of my own willful misconduct, and who applies for an
extension of the 10-year period within one year after (1) the last day of such period, or (2) the last day on which the individual was
prevented from pursuing the program, whichever is later, the 10-year period shall not run during the period of time I was prevented
from pursuing a program of education and the 10-year period will again be running on the first day following my recovery from the
disability, as determined under regulations issued by the Secretary of Veterans Affairs, for me to initiate or resume pursuit of a
program of education as provided in subsections (d) and (f) of Section 3031 of Title 38.
DD FORM 2940, JAN 2009
Adobe Professional 8.0