Complete Form 14568-C - Appendix C Part Ii Schedule 3 Seps And Sarseps with your personal data - all interactive fields are highlighted in places where you should type, access drop-down lists or select multiple-choice options. 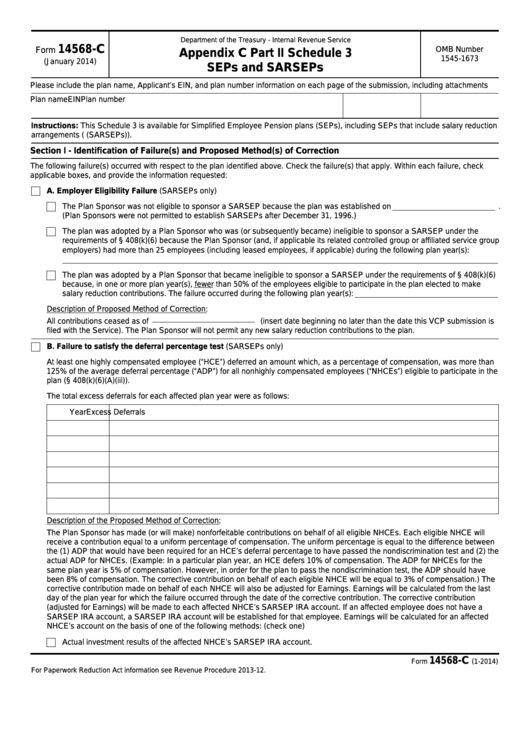 7
Department of the Treasury - Internal Revenue Service
14568-C
Form
OMB Number
Appendix C Part II Schedule 3
1545-1673
(January 2014)
SEPs and SARSEPs
Please include the plan name, Applicant’s EIN, and plan number information on each page of the submission, including attachments
Plan name
EIN
Plan number
Instructions: This Schedule 3 is available for Simplified Employee Pension plans (SEPs), including SEPs that include salary reduction
arrangements (i.e. Salary Reduction Simplified Employee Pension plans (SARSEPs)).
Section I - Identification of Failure(s) and Proposed Method(s) of Correction
The following failure(s) occurred with respect to the plan identified above. Check the failure(s) that apply. Within each failure, check
applicable boxes, and provide the information requested:
A. Employer Eligibility Failure (SARSEPs only)
The Plan Sponsor was not eligible to sponsor a SARSEP because the plan was established on
.
(Plan Sponsors were not permitted to establish SARSEPs after December 31, 1996.)
The plan was adopted by a Plan Sponsor who was (or subsequently became) ineligible to sponsor a SARSEP under the
requirements of § 408(k)(6) because the Plan Sponsor (and, if applicable its related controlled group or affiliated service group
employers) had more than 25 employees (including leased employees, if applicable) during the following plan year(s):
The plan was adopted by a Plan Sponsor that became ineligible to sponsor a SARSEP under the requirements of § 408(k)(6)
because, in one or more plan year(s), fewer than 50% of the employees eligible to participate in the plan elected to make
salary reduction contributions. The failure occurred during the following plan year(s):
Description of Proposed Method of Correction:
All contributions ceased as of
(insert date beginning no later than the date this VCP submission is
filed with the Service). The Plan Sponsor will not permit any new salary reduction contributions to the plan.
B. Failure to satisfy the deferral percentage test (SARSEPs only)
At least one highly compensated employee (“HCE”) deferred an amount which, as a percentage of compensation, was more than
125% of the average deferral percentage (“ADP”) for all nonhighly compensated employees (“NHCEs”) eligible to participate in the
plan (§ 408(k)(6)(A)(iii)).
The total excess deferrals for each affected plan year were as follows:
Year
Excess Deferrals
Description of the Proposed Method of Correction:
The Plan Sponsor has made (or will make) nonforfeitable contributions on behalf of all eligible NHCEs. Each eligible NHCE will
receive a contribution equal to a uniform percentage of compensation. The uniform percentage is equal to the difference between
the (1) ADP that would have been required for an HCE’s deferral percentage to have passed the nondiscrimination test and (2) the
actual ADP for NHCEs. (Example: In a particular plan year, an HCE defers 10% of compensation. The ADP for NHCEs for the
same plan year is 5% of compensation. However, in order for the plan to pass the nondiscrimination test, the ADP should have
been 8% of compensation. The corrective contribution on behalf of each eligible NHCE will be equal to 3% of compensation.) The
corrective contribution made on behalf of each NHCE will also be adjusted for Earnings. Earnings will be calculated from the last
day of the plan year for which the failure occurred through the date of the corrective contribution. The corrective contribution
(adjusted for Earnings) will be made to each affected NHCE’s SARSEP IRA account. If an affected employee does not have a
SARSEP IRA account, a SARSEP IRA account will be established for that employee. Earnings will be calculated for an affected
NHCE’s account on the basis of one of the following methods: (check one)
Actual investment results of the affected NHCE’s SARSEP IRA account.
14568-C
Catalog Number 66147U
Form
(1-2014)
For Paperwork Reduction Act information see Revenue Procedure 2013-12.