Complete Form 1095-C Draft - Employer-Provided Health Insurance Offer And Covegate - 2017 with your personal data - all interactive fields are highlighted in places where you should type, access drop-down lists or select multiple-choice options. 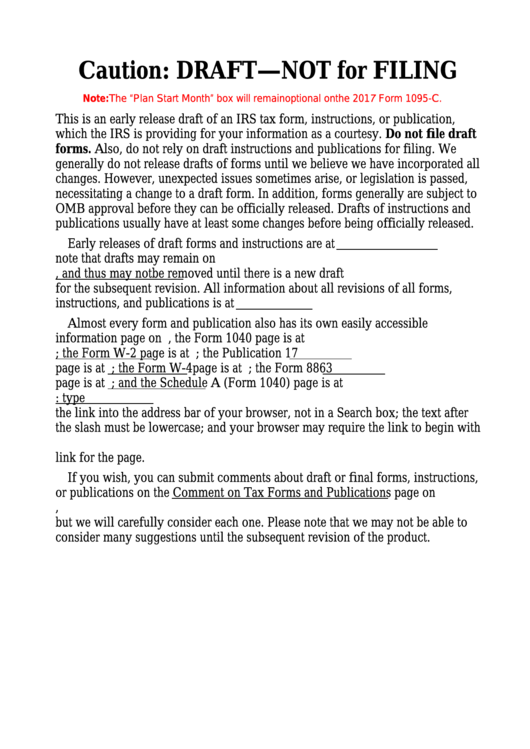 4
Caution: DRAFT—NOT for FILING
Note: The “Plan Start Month” box will remain optional on the 2017 Form 1095-C.
This is an early release draft of an IRS tax form, instructions, or publication,
which the IRS is providing for your information as a courtesy. Do not file draft
forms. Also, do not rely on draft instructions and publications for filing. We
generally do not release drafts of forms until we believe we have incorporated all
changes. However, unexpected issues sometimes arise, or legislation is passed,
necessitating a change to a draft form. In addition, forms generally are subject to
OMB approval before they can be officially released. Drafts of instructions and
publications usually have at least some changes before being officially released.
Early releases of draft forms and instructions are at IRS.gov/draftforms. Please
note that drafts may remain on IRS.gov even after the final release is posted at
IRS.gov/downloadforms, and thus may not be removed until there is a new draft
for the subsequent revision. All information about all revisions of all forms,
instructions, and publications is at IRS.gov/forms.
Almost every form and publication also has its own easily accessible
information page on IRS.gov. For example, the Form 1040 page is at
IRS.gov/form1040; the Form W-2 page is at IRS.gov/w2; the Publication 17
page is at IRS.gov/pub17; the Form W-4 page is at IRS.gov/w4; the Form 8863
page is at IRS.gov/form8863; and the Schedule A (Form 1040) page is at
IRS.gov/schedulea. If typing in the links above instead of clicking on them: type
the link into the address bar of your browser, not in a Search box; the text after
the slash must be lowercase; and your browser may require the link to begin with
“ Note that these are shortcut links that will automatically go to the actual
link for the page.
If you wish, you can submit comments about draft or final forms, instructions,
or publications on the Comment on Tax Forms and Publications page on
IRS.gov. We cannot respond to all comments due to the high volume we receive,
but we will carefully consider each one. Please note that we may not be able to
consider many suggestions until the subsequent revision of the product.