Complete Form 5305-Ra - Roth Individual Retirement Custodial Account with your personal data - all interactive fields are highlighted in places where you should type, access drop-down lists or select multiple-choice options. 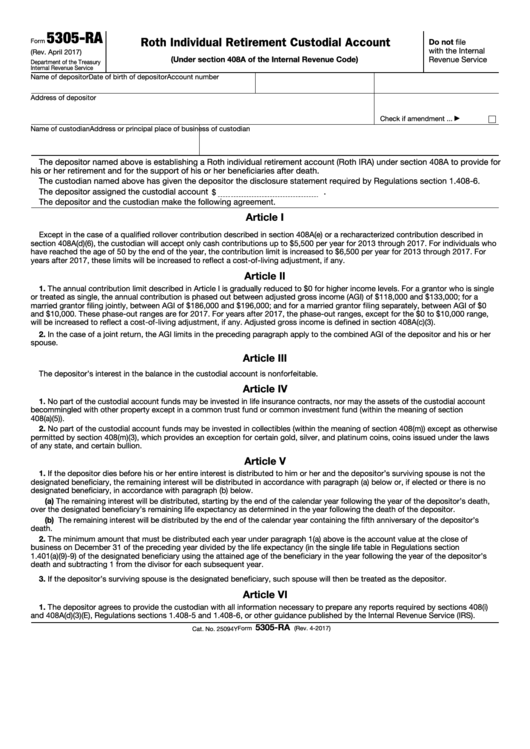 2
5305-RA
Roth Individual Retirement Custodial Account
Form
Do not file
with the Internal
(Rev. April 2017)
(Under section 408A of the Internal Revenue Code)
Revenue Service
Department of the Treasury
Internal Revenue Service
Name of depositor
Date of birth of depositor
Account number
Address of depositor
Check if amendment .
.
.
▶
Name of custodian
Address or principal place of business of custodian
The depositor named above is establishing a Roth individual retirement account (Roth IRA) under section 408A to provide for
his or her retirement and for the support of his or her beneficiaries after death.
The custodian named above has given the depositor the disclosure statement required by Regulations section 1.408-6.
The depositor assigned the custodial account
.
$
The depositor and the custodian make the following agreement.
Article I
Except in the case of a qualified rollover contribution described in section 408A(e) or a recharacterized contribution described in
section 408A(d)(6), the custodian will accept only cash contributions up to $5,500 per year for 2013 through 2017. For individuals who
have reached the age of 50 by the end of the year, the contribution limit is increased to $6,500 per year for 2013 through 2017. For
years after 2017, these limits will be increased to reflect a cost-of-living adjustment, if any.
Article II
1. The annual contribution limit described in Article I is gradually reduced to $0 for higher income levels. For a grantor who is single
or treated as single, the annual contribution is phased out between adjusted gross income (AGI) of $118,000 and $133,000; for a
married grantor filing jointly, between AGI of $186,000 and $196,000; and for a married grantor filing separately, between AGI of $0
and $10,000. These phase-out ranges are for 2017. For years after 2017, the phase-out ranges, except for the $0 to $10,000 range,
will be increased to reflect a cost-of-living adjustment, if any. Adjusted gross income is defined in section 408A(c)(3).
2. In the case of a joint return, the AGI limits in the preceding paragraph apply to the combined AGI of the depositor and his or her
spouse.
Article III
The depositor’s interest in the balance in the custodial account is nonforfeitable.
Article IV
1. No part of the custodial account funds may be invested in life insurance contracts, nor may the assets of the custodial account
be commingled with other property except in a common trust fund or common investment fund (within the meaning of section
408(a)(5)).
2. No part of the custodial account funds may be invested in collectibles (within the meaning of section 408(m)) except as otherwise
permitted by section 408(m)(3), which provides an exception for certain gold, silver, and platinum coins, coins issued under the laws
of any state, and certain bullion.
Article V
1. If the depositor dies before his or her entire interest is distributed to him or her and the depositor’s surviving spouse is not the
designated beneficiary, the remaining interest will be distributed in accordance with paragraph (a) below or, if elected or there is no
designated beneficiary, in accordance with paragraph (b) below.
(a) The remaining interest will be distributed, starting by the end of the calendar year following the year of the depositor’s death,
over the designated beneficiary’s remaining life expectancy as determined in the year following the death of the depositor.
(b) The remaining interest will be distributed by the end of the calendar year containing the fifth anniversary of the depositor’s
death.
2. The minimum amount that must be distributed each year under paragraph 1(a) above is the account value at the close of
business on December 31 of the preceding year divided by the life expectancy (in the single life table in Regulations section
1.401(a)(9)-9) of the designated beneficiary using the attained age of the beneficiary in the year following the year of the depositor’s
death and subtracting 1 from the divisor for each subsequent year.
3. If the depositor’s surviving spouse is the designated beneficiary, such spouse will then be treated as the depositor.
Article VI
1. The depositor agrees to provide the custodian with all information necessary to prepare any reports required by sections 408(i)
and 408A(d)(3)(E), Regulations sections 1.408-5 and 1.408-6, or other guidance published by the Internal Revenue Service (IRS).
5305-RA
Form
(Rev. 4-2017)
Cat. No. 25094Y