Complete I-407 - Abandonment Of Lawful Permanent Resident Status - Department Of Homeland Security with your personal data - all interactive fields are highlighted in places where you should type, access drop-down lists or select multiple-choice options. 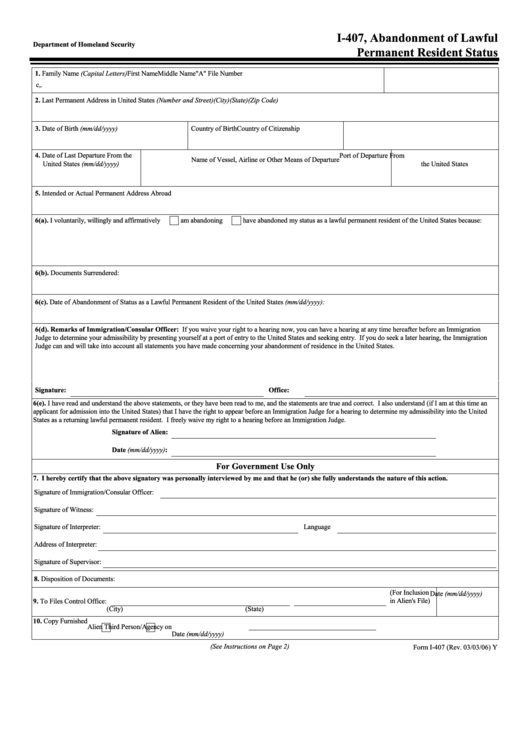 2
I-407, Abandonment of Lawful
Department of Homeland Security
Permanent Resident Status
U.S. Citizenship and Immigration Services
1. Family Name (Capital Letters)
First Name
Middle Name
"A" File Number
c,.
2. Last Permanent Address in United States (Number and Street)
(City)
(State)
(Zip Code)
3. Date of Birth (mm/dd/yyyy)
Country of Birth
Country of Citizenship
4. Date of Last Departure From the
Port of Departure From
Name of Vessel, Airline or Other Means of Departure
United States (mm/dd/yyyy)
the United States
5. Intended or Actual Permanent Address Abroad
6(a). I voluntarily, willingly and affirmatively
am abandoning
have abandoned my status as a lawful permanent resident of the United States because:
6(b). Documents Surrendered:
6(c). Date of Abandonment of Status as a Lawful Permanent Resident of the United States (mm/dd/yyyy):
6(d). Remarks of Immigration/Consular Officer: If you waive your right to a hearing now, you can have a hearing at any time hereafter before an Immigration
Judge to determine your admissibility by presenting yourself at a port of entry to the United States and seeking entry. If you do seek a later hearing, the Immigration
Judge can and will take into account all statements you have made concerning your abandonment of residence in the United States.
Signature:
Office:
6(e). I have read and understand the above statements, or they have been read to me, and the statements are true and correct. I also understand (if I am at this time an
applicant for admission into the United States) that I have the right to appear before an Immigration Judge for a hearing to determine my admissibility into the United
States as a returning lawful permanent resident. I freely waive my right to a hearing before an Immigration Judge.
Signature of Alien:
Date (mm/dd/yyyy):
For Government Use Only
7. I hereby certify that the above signatory was personally interviewed by me and that he (or) she fully understands the nature of this action.
Signature of Immigration/Consular Officer:
Signature of Witness:
Signature of Interpreter:
Language
Address of Interpreter:
Signature of Supervisor:
8. Disposition of Documents:
(For Inclusion
Date (mm/dd/yyyy)
in Alien's File)
9. To Files Control Office:
(City)
(State)
10. Copy Furnished
Alien
Third Person/Agency on
Date (mm/dd/yyyy)
(See Instructions on Page 2)
Form I-407 (Rev. 03/03/06) Y