Dd Form 1870 - Nomination For Appointment To The United States Academy

Complete Dd Form 1870 - Nomination For Appointment To The United States Academy with your personal data - all interactive fields are highlighted in places where you should type, access drop-down lists or select multiple-choice options. 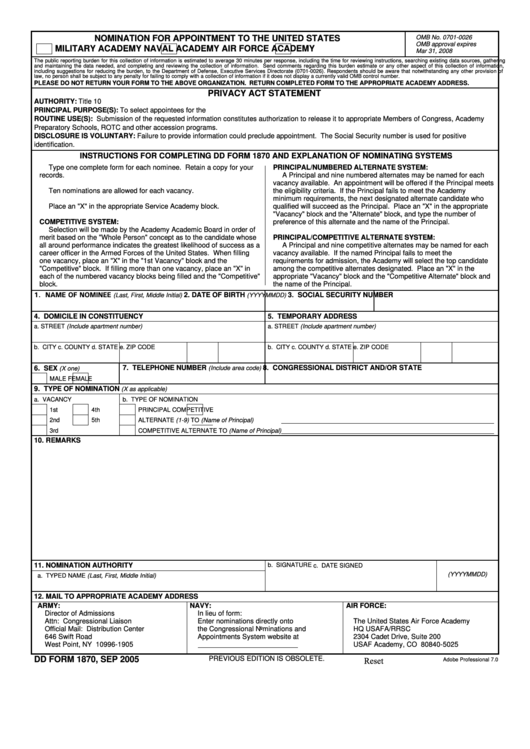 1
NOMINATION FOR APPOINTMENT TO THE UNITED STATES
OMB No. 0701-0026
OMB approval expires
MILITARY ACADEMY
NAVAL ACADEMY
AIR FORCE ACADEMY
Mar 31, 2008
The public reporting burden for this collection of information is estimated to average 30 minutes per response, including the time for reviewing instructions, searching existing data sources, gathering
and maintaining the data needed, and completing and reviewing the collection of information. Send comments regarding this burden estimate or any other aspect of this collection of information,
including suggestions for reducing the burden, to the Department of Defense, Executive Services Directorate (0701-0026). Respondents should be aware that notwithstanding any other provision of
law, no person shall be subject to any penalty for failing to comply with a collection of information if it does not display a currently valid OMB control number.
PLEASE DO NOT RETURN YOUR FORM TO THE ABOVE ORGANIZATION. RETURN COMPLETED FORM TO THE APPROPRIATE ACADEMY ADDRESS.
PRIVACY ACT STATEMENT
AUTHORITY: Title 10 U.S.C. 9346 and E.O. 9397
PRINCIPAL PURPOSE(S): To select appointees for the U.S. Service Academies.
ROUTINE USE(S): Submission of the requested information constitutes authorization to release it to appropriate Members of Congress, Academy
Preparatory Schools, ROTC and other accession programs.
DISCLOSURE IS VOLUNTARY: Failure to provide information could preclude appointment. The Social Security number is used for positive
identification.
INSTRUCTIONS FOR COMPLETING DD FORM 1870 AND EXPLANATION OF NOMINATING SYSTEMS
Type one complete form for each nominee. Retain a copy for your
PRINCIPAL/NUMBERED ALTERNATE SYSTEM:
records.
A Principal and nine numbered alternates may be named for each
vacancy available. An appointment will be offered if the Principal meets
Ten nominations are allowed for each vacancy.
the eligibility criteria. If the Principal fails to meet the Academy
minimum requirements, the next designated alternate candidate who
Place an "X" in the appropriate Service Academy block.
qualified will succeed as the Principal. Place an "X" in the appropriate
"Vacancy" block and the "Alternate" block, and type the number of
COMPETITIVE SYSTEM:
preference of this alternate and the name of the Principal.
Selection will be made by the Academy Academic Board in order of
merit based on the "Whole Person" concept as to the candidate whose
PRINCIPAL/COMPETITIVE ALTERNATE SYSTEM:
all around performance indicates the greatest likelihood of success as a
A Principal and nine competitive alternates may be named for each
career officer in the Armed Forces of the United States. When filling
vacancy available. If the named Principal fails to meet the
one vacancy, place an "X" in the "1st Vacancy" block and the
requirements for admission, the Academy will select the top candidate
"Competitive" block. If filling more than one vacancy, place an "X" in
among the competitive alternates designated. Place an "X" in the
each of the numbered vacancy blocks being filled and the "Competitive"
appropriate "Vacancy" block and the "Competitive Alternate" block and
block.
the name of the Principal.
1. NAME OF NOMINEE
2. DATE OF BIRTH
3. SOCIAL SECURITY NUMBER
(Last, First, Middle Initial)
(YYYYMMDD)
4. DOMICILE IN CONSTITUENCY
5. TEMPORARY ADDRESS
a. STREET (Include apartment number)
a. STREET (Include apartment number)
b. CITY
c. COUNTY
d. STATE e. ZIP CODE
b. CITY
c. COUNTY
d. STATE e. ZIP CODE
7. TELEPHONE NUMBER
8. CONGRESSIONAL DISTRICT AND/OR STATE
6. SEX
(Include area code)
(X one)
MALE
FEMALE
9. TYPE OF NOMINATION
(X as applicable)
a. VACANCY
b. TYPE OF NOMINATION
1st
4th
PRINCIPAL
COMPETITIVE
2nd
5th
ALTERNATE (1-9)
TO (Name of Principal)
3rd
COMPETITIVE ALTERNATE TO (Name of Principal)
10. REMARKS
11. NOMINATION AUTHORITY
b. SIGNATURE
c. DATE SIGNED
(YYYYMMDD)
a. TYPED NAME (Last, First, Middle Initial)
12. MAIL TO APPROPRIATE ACADEMY ADDRESS
ARMY:
NAVY:
AIR FORCE:
Director of Admissions
In lieu of form:
Attn: Congressional Liaison
Enter nominations directly onto
The United States Air Force Academy
Official Mail: Distribution Center
the Congressional Nominations and
HQ USAFA/RRSC
646 Swift Road
Appointments System website at
2304 Cadet Drive, Suite 200
West Point, NY 10996-1905
USAF Academy, CO 80840-5025
Reset
DD FORM 1870, SEP 2005
PREVIOUS EDITION IS OBSOLETE.
Adobe Professional 7.0

Form Nomination Of Sorghum Producers For Appointment To The Sorghum Promotion, Research And Information Board Business

Form 5170.7 - Application And Permit To Ship Liquors And Articles Of Puerto Rican Manufacture Taxpaid To The United States - 2015 Legal