Complete Mortgage Broker Agreement Template with your personal data - all interactive fields are highlighted in places where you should type, access drop-down lists or select multiple-choice options. 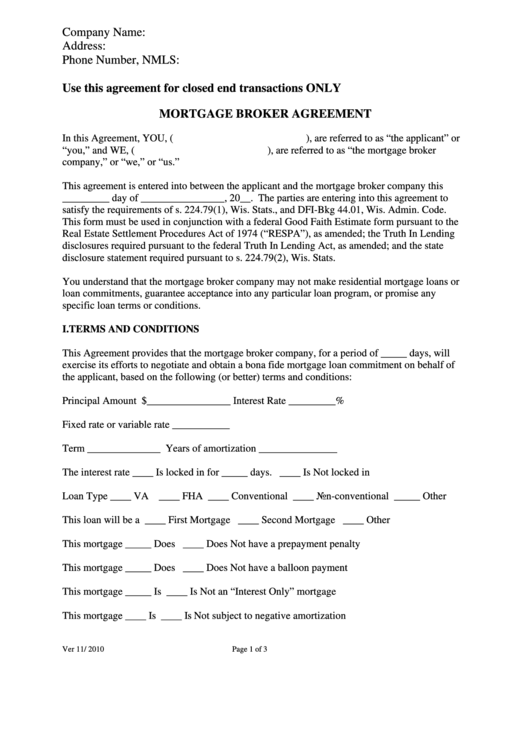 3
Company Name:
Address:
Phone Number, NMLS:
Use this agreement for closed end transactions ONLY
MORTGAGE BROKER AGREEMENT
In this Agreement, YOU, (
), are referred to as “the applicant” or
“you,” and WE, (
), are referred to as “the mortgage broker
company,” or “we,” or “us.”
This agreement is entered into between the applicant and the mortgage broker company this
_________ day of ________________, 20__. The parties are entering into this agreement to
satisfy the requirements of s. 224.79(1), Wis. Stats., and DFI-Bkg 44.01, Wis. Admin. Code.
This form must be used in conjunction with a federal Good Faith Estimate form pursuant to the
Real Estate Settlement Procedures Act of 1974 (“RESPA”), as amended; the Truth In Lending
disclosures required pursuant to the federal Truth In Lending Act, as amended; and the state
disclosure statement required pursuant to s. 224.79(2), Wis. Stats.
You understand that the mortgage broker company may not make residential mortgage loans or
loan commitments, guarantee acceptance into any particular loan program, or promise any
specific loan terms or conditions.
I.
TERMS AND CONDITIONS
This Agreement provides that the mortgage broker company, for a period of _____ days, will
exercise its efforts to negotiate and obtain a bona fide mortgage loan commitment on behalf of
the applicant, based on the following (or better) terms and conditions:
Principal Amount $________________
Interest Rate _________%
Fixed rate or variable rate ___________
Term ______________
Years of amortization _______________
The interest rate ____ Is locked in for _____ days. ____ Is Not locked in
Loan Type ____ VA ____ FHA ____ Conventional ____ Non-conventional _____ Other
This loan will be a ____ First Mortgage ____ Second Mortgage ____ Other
This mortgage _____ Does ____ Does Not have a prepayment penalty
This mortgage _____ Does ____ Does Not have a balloon payment
This mortgage _____ Is ____ Is Not an “Interest Only” mortgage
This mortgage ____ Is ____ Is Not subject to negative amortization
Ver 11/ 2010
Page 1 of 3