Complete Dd Form 2656-11 - Statement Certifying Number Of Months Of Sbp Premiums Paid - April 2009 with your personal data - all interactive fields are highlighted in places where you should type, access drop-down lists or select multiple-choice options. 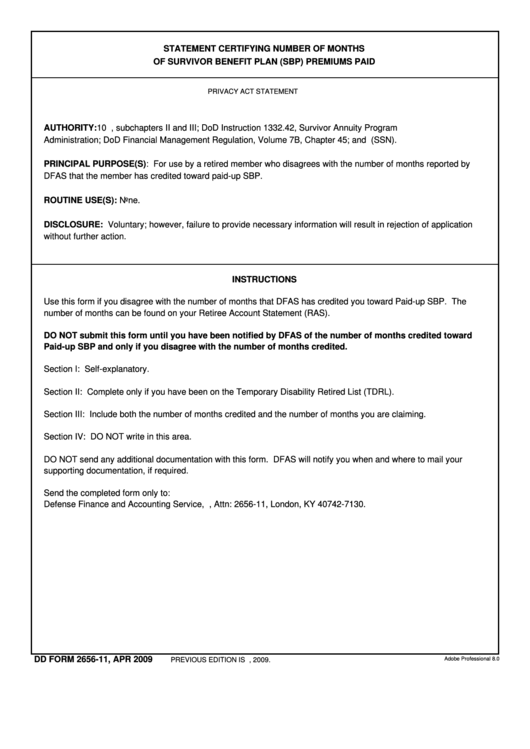 2
STATEMENT CERTIFYING NUMBER OF MONTHS
OF SURVIVOR BENEFIT PLAN (SBP) PREMIUMS PAID
PRIVACY ACT STATEMENT
AUTHORITY: 10 U.S.C. Chapter 73, subchapters II and III; DoD Instruction 1332.42, Survivor Annuity Program
Administration; DoD Financial Management Regulation, Volume 7B, Chapter 45; and E.O. 9397 (SSN).
PRINCIPAL PURPOSE(S): For use by a retired member who disagrees with the number of months reported by
DFAS that the member has credited toward paid-up SBP.
ROUTINE USE(S): None.
DISCLOSURE: Voluntary; however, failure to provide necessary information will result in rejection of application
without further action.
INSTRUCTIONS
Use this form if you disagree with the number of months that DFAS has credited you toward Paid-up SBP. The
number of months can be found on your Retiree Account Statement (RAS).
DO NOT submit this form until you have been notified by DFAS of the number of months credited toward
Paid-up SBP and only if you disagree with the number of months credited.
Section I: Self-explanatory.
Section II: Complete only if you have been on the Temporary Disability Retired List (TDRL).
Section III: Include both the number of months credited and the number of months you are claiming.
Section IV: DO NOT write in this area.
DO NOT send any additional documentation with this form. DFAS will notify you when and where to mail your
supporting documentation, if required.
Send the completed form only to:
Defense Finance and Accounting Service, P.O. Box 7190, Attn: 2656-11, London, KY 40742-7130.
DD FORM 2656-11, APR 2009
Adobe Professional 8.0
PREVIOUS EDITION IS OBSOLETE. THIS FORM EXPIRES ON JUNE 30, 2009.