DD Form 350, Individual Contracting Action Report is a document that contains information about contracts for goods and services between the private sector and the military agencies within the U.S. Department of Defense.

The DD 350 is part of the Records of Prime Contracts Awarded by the Military Services and Agencies (DCADS) series along with the DD Form 1057, the Monthly Summary of Contracting Actions, which provides information on the total number of contracts issued by each of the military agencies monthly.

The latest edition of this form was published and used by the U.S. Department of Defense in October 2003 and is available for download below.

1. Part A of the form identifies the report and the activity being reported. It should be filled completely. All four lines within the section must be completed.

Line A3A calls for a Reporting Agency FIPS 95 Code. The codes are as follows:

2. Part B describes the transaction. It contains contract identification information, the number of the contract, its origin, order ID, the date of delivery and all data that relates to the contractor whose name and agency are featured in the actual paperwork.

Enter the code that indicates the agency that assigned the contract number in Line B1B, Origin of Contract. Use Code A for contract assigned by the DoD, Code B for NASA and Code C for Other Non-DoD Agencies.

Enter one of the following codes in Line B1C, Bundled Contract:

If Line B1C is coded Y, use the following codes in Line B1D:

Enter one of the following codes in Line B1E, Performance-based Service Contract:

Enter Code Y in Line B5B, Government Agency, if the contractor is Federal. Enter Code N if Code Y does not apply.

Line B13A, Contract of Order, calls for the following codes:

This section also includes the principal place of contract performance, the products or services provided, the total estimated value of the contract and a detailed overview of the kinds of actions described in the contract.

3. Part C of DD Form 350 reviews several areas of the contracting procedure. It summarizes whether or not the synopsis of the proposed action was transmitted and prepared, analyzes the extent competed, lists the number of offerors and offers, solicitation procedures and provides information on financing. 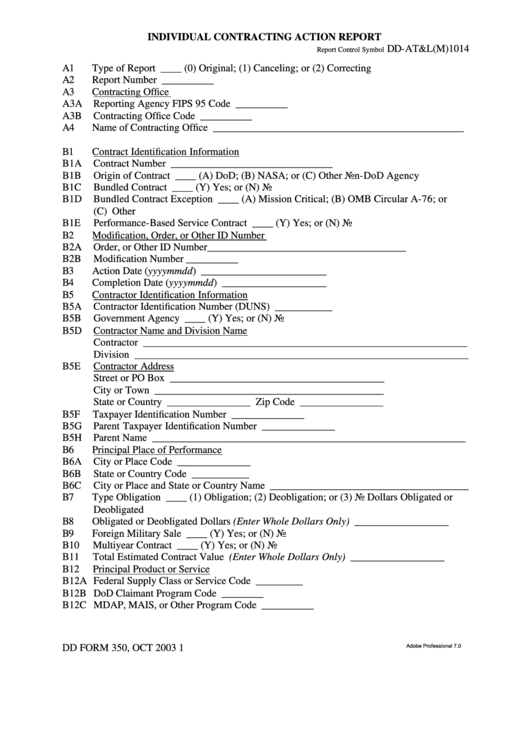 Top Ten Easter Arts And Crafts Activities For Your Kids

Free Easter Coloring Pages And Easter Printables For Your Kids