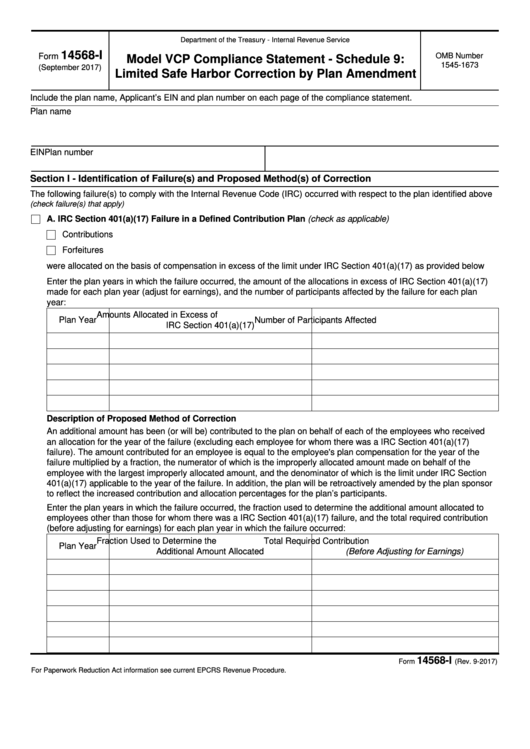 5
Department of the Treasury - Internal Revenue Service
14568-I
Form
OMB Number
Model VCP Compliance Statement - Schedule 9:
1545-1673
(September 2017)
Limited Safe Harbor Correction by Plan Amendment
Include the plan name, Applicant’s EIN and plan number on each page of the compliance statement.
Plan name
EIN
Plan number
Section I - Identification of Failure(s) and Proposed Method(s) of Correction
The following failure(s) to comply with the Internal Revenue Code (IRC) occurred with respect to the plan identified above
(check failure(s) that apply)
A. IRC Section 401(a)(17) Failure in a Defined Contribution Plan (check as applicable)
Contributions
Forfeitures
were allocated on the basis of compensation in excess of the limit under IRC Section 401(a)(17) as provided below
Enter the plan years in which the failure occurred, the amount of the allocations in excess of IRC Section 401(a)(17)
made for each plan year (adjust for earnings), and the number of participants affected by the failure for each plan
year:
Amounts Allocated in Excess of
Plan Year
Number of Participants Affected
IRC Section 401(a)(17)
Description of Proposed Method of Correction
An additional amount has been (or will be) contributed to the plan on behalf of each of the employees who received
an allocation for the year of the failure (excluding each employee for whom there was a IRC Section 401(a)(17)
failure). The amount contributed for an employee is equal to the employee's plan compensation for the year of the
failure multiplied by a fraction, the numerator of which is the improperly allocated amount made on behalf of the
employee with the largest improperly allocated amount, and the denominator of which is the limit under IRC Section
401(a)(17) applicable to the year of the failure. In addition, the plan will be retroactively amended by the plan sponsor
to reflect the increased contribution and allocation percentages for the plan’s participants.
Enter the plan years in which the failure occurred, the fraction used to determine the additional amount allocated to
employees other than those for whom there was a IRC Section 401(a)(17) failure, and the total required contribution
(before adjusting for earnings) for each plan year in which the failure occurred:
Fraction Used to Determine the
Total Required Contribution
Plan Year
Additional Amount Allocated
(Before Adjusting for Earnings)
14568-I
Catalog Number 66156F
Form
(Rev. 9-2017)
For Paperwork Reduction Act information see current EPCRS Revenue Procedure.

Appendix F, Schedule 9 Correction By Plan Amendment (in Accordance With Appendix B) Financial